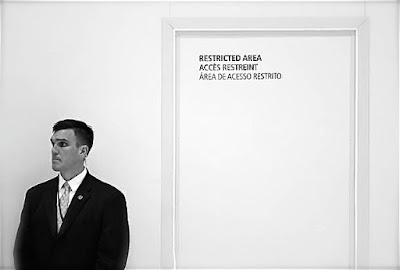 In the November 8 New Yorker, Steve Coll expresses a series of reservations about WikiLeaks and Julian Assange. He raises, only to set aside, doubts about Assange's character and recent charges of rape to focus on "his political conceptions and acuity" (27). The core of Coll's criticism is that WikiLeaks "so far . . . lacks an ethical culture that is consonant with the ideals of free media" (28). Coll never quite specifies what these ideals are, but at one point opposes "dissent" to "vandalism": WikiLeaks "will have to steer through the foggy borderlands" between the two. Another version of this opposition pits "insurgency" against journalism as a profession, which, "despite its flaws, has constructed its legitimacy by serving as a check on governmental and corporate power within constitutional arrangements that assume the viability of the rule of law," or "normalcy within a national system" (28). "Ethical culture" is thus associated with the subordination of the questioning of the state to the defense, at most the expansion, of legal citizenship within a particular state.

Coll does not mention WikiLeaks' association with The Guardian, Der Spiegel, and The New York Times to release the Afghanistan and Iraq War Logs. But describing the papers' contact with Assange, The New York Times's Eric Schmitt also underlines the distinction between journalists and "sources" to exclude Assange from the media, stressing that the journalists alone arranged the documents to make them intelligible to the reader ("we were not in any kind of partnership or collaboration with him. This was a source relationship. He’s making it sound like this was some sort of journalistic enterprise between WikiLeaks, The New York Times, The Guardian, and Der Spiegel, and that’s not what it was” [quoted in Clint Hendler, "The Story Behind the Publication of WikiLeaks’s Afghanistan Logs," Columbia Journalism Review, July 28, 2010). Schmitt implies that if he was not collaborating in a "journalistic enterprise," then he was not collaborating in anything. Coll's and Schmitt's primary reaction is to struggle with WikiLeaks' wielding of information without narratives --except that of its own heroism--and without neutrality. Rather than addressing the reader from a position between the reader and the state, WikiLeaks make the reader a witness to a contest between the state and itself, while the media mediates between the files and the reader. Schmitt calls WikiLeaks the "source" to assimilate this situation to what the media usually does: frame the source for the reader. But because WikiLeaks is not in fact the original source, and yet also presents its data independently, underneath runs the anxiety that it is a media entity trying to get itself into the position of a state-level actor, at least in its structural relation to other media--and even, in the case of the leaked U.S. Embassy cables, other governments. Coll's qualification, "free media," suggests that WikiLeaks' tactics could be consistent with unfree or state media.

Interestingly, Assange's texts "State and Terrorist Conspiracies" and "Conspiracy as Governance" (2006) describe his goal and that of state-associated conspiracy as that of obstructing communication. By "conspiracy" he means the organization to mutual benefit of authoritarian elites, including government agencies and mass media. Communicative restriction, he writes, is the modus operandi of conspiracy: "usually the effect runs the other way; it is the conspiracy that is the agent of deception and information restriction." Although leaks create new chances for communication--"only revealed injustice can be answered"--Assange's texts more often describe the leaks as double negatives restricting the conspiracy's restrictive powers, which are inseparable from its productive communicative powers. Finally the effect runs this way: "we can reduce total conspiratorial power via unstructured attacks on links or through throttling and separating." On the whole, rather than claiming to enhance transparency, Assange points out that one party's transparency is another's opacity. To harass the opposition is to make it hesitate to speak. Insofar as this is WikiLeaks' program, it may be disquieting but not contradictory that it operates secretly--that, as rival leaker John Young remarks, "They're acting like a government."

It isn't finally the hiddenness of the data that's at issue for Assange, but its ability to flow at all. Still, restriction and efficiency are supposed to be linked, since broader knowledge of what governments do is imagined to be in itself a way of slowing their doing it. The idea is that data wouldn't stream as efficiently toward any purpose if people couldn't be sure that they could control it. And control, again, is imagined to consist of distributing non-information and limiting operational information. One outcome to anticipate from Assange's point of view, then, would be a technological arms race in which state agencies shift from security clearances and encryption to more sophisticated digital defenses. But another possible development appears in an NSA text called "Toward a Taxonomy of Secrets" published by Young on his own leak site, Cryptome. The author, a philosophically minded engineer for the NSA, concludes that not all secrets can or need to be digitally managed:

Our efforts might, in some cases, be better applied to understanding the motivations and dynamics that are creating the secrets in the first place, with an eye toward coming up with a system that better maps to the human processes and behavioral tendencies.

We may find that by shifting the structures, rules, and value systems in human space, we have fewer secrets to deal with. We may find that we can alter the human-space systems to clarify the context and valuation of secrets, and put them into a form more amenable to elegant automation. We must get back to the notion that, in dealing with secrets, the human/automation construct works better if the whole system is adapted to the behaviors, values, and motivations of the humans.

A more secure world, for the engineer, is one in which on the one hand, secrets are safest when those who want them kept mobilize human beings' various positive desires for secrecy, while on the other by "shifting . . . value systems" one may create less need to have certain information secret, and hence to have it revealed, as the case may be. Roberto Bolaño describes such a state of affairs in By Night in Chile (2000). The narrator is sworn to "absolute discretion" about being hired to give General Pinochet's junta an academic introduction to Marxism. Having completed this black-comic commission, he unburdens himself to a friend, only to hear his story repeated all over Santiago, to his horror. He expects recriminations, but the phone never rings. "At first I thought this silence was the result of a concerted decision to ostracize me. Then, to my astonishment, I realized that nobody gave a damn. The country was populated by hieratic figures, heading implacably towards an unfamiliar, grey horizon, where one could barely glimpse a few rays of light, flashes of lightning and clouds of smoke" (By Night in Chile, trans. Chris Andrews, 102). This world already exists, its logic expressed by the Daily Telegraph's deputy editor, Benedict Brogan: "The Saudis would like someone to whack Iran? No kidding . . . . infinite boredom" ("WikiLeaks is embarrassing – but not serious," November 28, 2010). WikiLeaks did not create new possibilities for Brogan's boredom: by his own declaration, he was already well and truly bored. Maybe, then, it's actually the vastness of such uncaring that WikiLeaks brings to light, in so doing giving it the chance to be otherwise.


photo: A Secret Service agent stands outside a door waiting for the entrance of Barack Obama at a press conference at the end of the NATO Summit at Feira Internacional de Lisboa, November 20, 2010 (Getty).
Posted by RT at 4:20 PM

Dang, lots of stuff to think about there, and I never really looked at how Wikileaks fit into ideas of 'the media' before. Good stuff.

Just found this interesting study. It predicts an increase in authoritarianism, using the government crackdown on Wikileaks as a prime example. The author says, “The WikiLeaks saga could end abruptly if the authoritarian impulse to extinguish the site prevails. Regardless, the struggle between secrecy and transparency—and authoritarianism and anti-authoritarianism—will continue to intensify.” Very interesting read. Highly recommended: http://www.socionomics.net/free-reports/1008/wikileaks-authoritarianism-update.aspx

Assange is just like a hero for me. IMO he has done such thing which couldn't be done by anyone. Hats off to his dare. He has shown the real face of the leaders to the entire world.

Can work that doesn't finish and doesn't have to be read be released into "writing," without losing its character as work?

Rights of the Form


Do these spaces have to choose between self-promotion and anonymity? Anne-Lise François has shown how to think about a kind of utterance that doesn’t have to make itself heard (in fact, can you ever make yourself heard?) while inviting one to hear it more actively (François, Open Secrets: Toward a Theory of Recessive Action [Stanford UP, 2008].) Writing would seem to be a paradigm for this kind of utterance, since it makes itself available but, if it isn’t advertising, doesn't force itself into the mind of the reader. The reader can leave the sentence at any time. Anne-Lise and I went to LACMA’s show Beyond Geometry, which featured mostly minimalist objects, and we liked their air of uncaring either to obscure themselves or to take up our time. Cildo Meireles’s almost invisible 3/8" cube (below) stood directly on the floor in a little square of light; you couldn’t find the object without laughing. Writers have often inhabited imaginary spaces populated only by potential or posthumous readers. In a vast empty space it’s a good idea to write softly, since the emptiness is resounding. Every scrap of writing has a claim and a right to be, but not a right to be much.